Restaurant Design in the Age of On-Demand Food Delivery

Restaurants aren't dead; they're just different. Or at least, they’ll have to become much more different from what they are if they’re to thrive in a rapidly evolving industry.

As off-premises dining and third-party delivery continues growing at an exponential rate (especially with the current state of affairs), restaurant design must be reimagined to accommodate this change in customer behavior, while still appealing to those who want novel dining experiences.

The biggest shift in restaurant design is the shift away from actual design. Now, the focus has to be entirely on designing for the restaurant experience.

"If any brand or design team just focused on restaurant design, they're missing the bigger picture and the bigger opportunities," Strieff said.

And as dining behaviors have changed, so too must restaurant designs. They have to accommodate today’s influx of carryout and delivery orders, but not at the total expense of the in-store dining experience. Restaurants are evolving, but people still crave exciting experiences and human connection. "It's up to us to provide that and spend just as much effort doing that as we are accommodating the other wave of [carryout and delivery]," Strieff said.

Blaze Pizza is a fast-casual pizza chain with a huge social media presence and a dedicated following. Even so, Strieff said, they are careful not to craft "contrived environments" designed for "Instagrammable moments."

At Whole Foods, the experience of shopping at a Whole Foods is just as important as the products themselves. That's why when you walk into a Whole Foods store, typically the first thing you see are rows and rows of colorful fruits and vegetables. The stores are laid out this way to evoke the brand's values around freshness, health, and environmental consciousness from the minute customers walk through the doors, Rosi explained.

In terms of the way the stores are designed to communicate the brand's ethos, Rosi doesn't want to change any of that. But there are some areas where efficiency could be improved, and they are working on small tweaks like introducing self-serve concepts in order to facilitate that.

"[Food retail] isn't dead; it's changing. There are a lot of opportunities for companies to tweak what that experience is, especially with one-on-one interactions between customers and employees," she said.

Focus on What the Guest Actually Cares About

There are ways to provide a great guest experience that is still profitable to the brand, Strieff said. One way is to just focus on the aspects of the experience the guests actually care about. Your store could have the most beautiful ceilings in the world, but do the customers even notice them? Instead, she advised, spend the money where it makes the most sense, and if you're trying to save, say, 10 percent in total costs, don't just cut 10 percent on everything across the board.

"What you end up doing is creating this experience that's 10 percent worse," she said. "What you might end up doing instead is spending more money on a better chair or a more expensive table top, wherever the food touches that customers actually interface with, and ruthlessly cutting on everything else. That way you're really impacting the things that people care about."

Rosi backed this up, saying that ultimately, it is what the customer actually sees and touches that makes the difference.

"I've always been an advocate for 'less is more,'" she said. Her goal with the store design is fewer distractions. "We have such a story to tell at Whole Foods about our suppliers and our connection to healthy eating, and we tend to be very verbose about that in stores. No one is going to read any of that, so now we try to be strategic in what messages we're actually telling and be consistent with that throughout the company. Then we can take that money and put it somewhere else."

At Chick-Fil-A, Newland said the company is focused on finding the best solution for third-party delivery. As so many other fast-casual and quick service chains have experienced in recent years, off-premises sales are growing exponentially, and their restaurants were simply not designed to service the kind of volume that delivery now comprises.

"We need to be able to service that DoorDasher in a way that honors them by actually getting them in and out fast so that they honor our guest at the end of that delivery," she said. "The best way for them to pick up right now is to actually come into the building, so for us the challenge is how to get them through our parking lot and back out without ever getting out of their cars."

A "ghost" or "dark" kitchen is one solution they are considering for third-party delivery. While drive-through lines at the freestanding restaurants will often wrap around the building during peak times, a ghost kitchen located centrally to a cluster of stores could service all of the third-party delivery orders so that drivers can pick up their orders much faster in a much more streamlined process.

Blaze Pizza is also open to having a commissary outpost for delivery and carryout only. "I don't think anything is off the table right now," said Strieff. "There are certain areas where it doesn't make sense to offer a dine-in experience or it doesn’t make sense to have a drive-through lane or curbside pickup. There isn't a one-size-fits-all approach; there is just a real estate and development approach."

Technology to Work with Humans, Not Against Them

The integration of technology is another significant shift for restaurants and food retailers to grapple with. Customers are already embracing online and app-based ordering, while self-checkout is already the norm for food retailers.

Self-service kiosks at quick service and fast casual restaurants will likely become more prominent, but that does require some rethinking around front-of-house space allocation and labor. Strieff, who previously worked for McDonalds, said the Golden Arches had a great crystal ball with their stores in Europe, where the kiosk usage rate was something like 93 percent. She believes the States will get there eventually, but adds that it took 10 years to reach that level of penetration in Europe.

With regard to self-service kiosks, Rosi said that "everybody wants to do it and no one really knows how." But, she added, with Whole Foods now being owned by Amazon—which at its core is a tech company—tech innovations are imminent. While she didn’t yet know what the balance will be between technology and the real, live customer experience, she knows that team members aren't going anywhere—they create that personal experience that is integral to the brand.

Strieff also talked about needing a balance between technology and human interaction, arguing against having customers walk into a restaurant and being confronted by a "gauntlet" of screens and kiosks. She said that, especially as delivery and carryout are growing, it is critical that in the few minutes customers are spending inside the store that they're having an impactful experience.

“We can’t hit them with things that are convenient for us and maybe annoying for them," she said.

Automation is another tech advancement that gets discussed a lot in regard to restaurants. Strieff said taking aspects of food prep that can be automated easily could streamline operations, freeing up the human staff to focus on other aspects of hospitality. She doesn’t see automation as a labor "saving," but rather a shift toward more skilled labor. 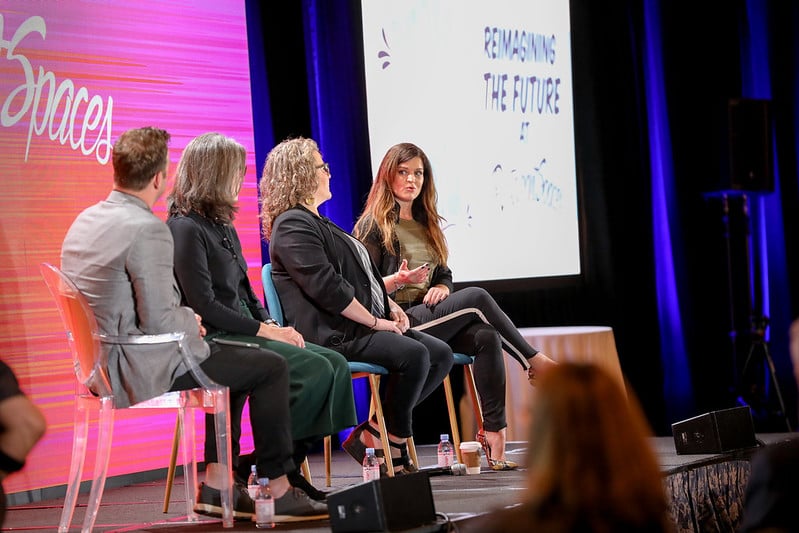 Chick-fil-A uses "upstream ordering," where team members take the orders of guests waiting in line on an iPad and move them through the queue. "We use technology as an enhancement to the human," said Newland. In addition to getting restaurants better prepared to handle delivery orders, they are also considering the possibility of drone and driverless car delivery, and how that might impact their physical stores. It’s a long-term bet, she said, but they want to be prepared for it and start making those investments now.

While the future can't really be predicted, especially in times of uncertainty, the continued growth of third-party delivery and an increase in integrated technologies are pretty sure bets. Restaurant design needs to adapt to this dramatic shift in business, while also still delivering on its core experience: being a restaurant.