How Virtual Brands are Changing the Restaurant Industry

It’s estimated that virtual restaurant brands will become a $1 trillion industry by 2030, according to Michael Schaefer, global lead for food and beverage at Euromonitor International.

That’s a statistic many restaurant companies are now seeking to capitalize on, as consumer behaviors continue to shift and digital disruption reshapes the industry. Some, like WOW BAO, are willing to base their entire strategy on where the trend is headed.

We dove into the Asian fusion concept’s wild plans for expansion — made possible through its innovative dark kitchen strategy — on the first episode of DISRUPT, our new LinkedIn Live webshow. In this series, we have casual conversations with those thinking differently about the future of restaurants.

A Move Away from Brick-and-Mortar

Geoff Alexander, CEO and President of WOW BAO, believes so strongly in the growth of virtual brands, that he’s shifted the company’s entire focus away from stamping out physical locations, of which they have just a handful. Expansion from here will be done entirely through ghost, or dark, kitchens.

WOW BAO’s approach to dark kitchens is somewhat unconventional. Rather than utilize a dedicated third-party ghost kitchen provider, it partners with existing restaurants that have the necessary kitchen space. Which isn’t much. For a location to begin spitting out WOW BAO’s Asian buns, potstickers, and dumplings, all that’s essentially needed is a pot that can boil water.

To expand its reach even further, WOW BAO is continuing growth in another direction: grocery stores. Many of the new locations will be inside Walmart, stemming from a partnership with Ghost Kitchen Brands to open 100 new WOW BAO dark kitchens this year. Overall, WOW BAO is planning to have over 1,000 total locations by the end of 2021.

Not only a way for WOW BAO to quickly add new locations, the concept’s ghost kitchen model has so far proved a boon for the restaurant companies it’s partners with.

Brands like Fazoli’s are benefitting from a welcome boost to topline sales, with profits at many locations in the thousands per week. These partnerships are also helping businesses that are seasonal, struggling, or could just use some extra cash. For example, ice cream shops that only get high traffic in the summer months can open their kitchens and benefit from a partnership in the winter. The same goes for catering companies that are seasonally busy around weddings and holidays. Grocery stores like Walmart benefit from the partnership as well, with WOW BAO adding value for their shoppers.

To further the point, Geoff breaks down the thought process:

“If I’m selling hamburgers and I can get you to eat 6 days of the week, what happens on day 7? If I have a virtual restaurant, I can save that sale on Day 7 as opposed to losing it to a competitor.”

The New Age of Virtual Brands and Ghost Kitchens

Geoff predicts that ghost kitchens and the entirety of the virtual restaurant industry will continue to thrive, though he doesn’t think physical locations will disappear completely. People will always want to gather around meals to celebrate, he said in our interview. Still, the dining habits of the consumer are rapidly changing. 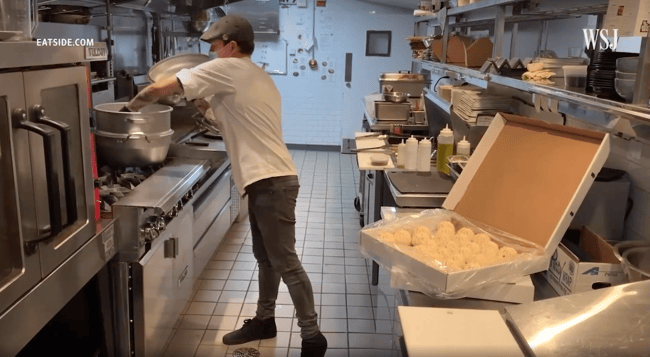 “They [the consumer] have the ability to get whatever they want, whenever they want.” Geoff told us, in reference to the ongoing explosion in digital ordering, which was only accelerated by the pandemic. Suburban restaurants, for example, are now serving customers who previously only ate lunch in the business districts during work hours. Even as people return to jobs on-site, they are accustomed to getting lunch delivered and less likely to eat out. In general, people are warmed up to the idea of quicker access to their favorite foods.

These changes aren’t going anywhere, and restaurant brands that take steps now to get involved in the virtual restaurant phenomenon will only benefit in the years to come. However, Alexander highlighted the importance of due diligence before making the jump.

“As you’re turning on a virtual brand, you need to think about the work labor that you’re adding into this,” he said, listing considerations that brands need to take. “We know our packaging works to keep food hot, and travels well with the third parties. If you’re out there thinking about starting your own virtual brand, don’t forget about the packaging, it’s important for the end-user. We also have all of our own food photography. So when we go into the 3rd-party apps, we have great looking food. If we just started Just Hot Dogs Stand tomorrow, will people buy from Just Hot Dogs Stand? I don't think that they will.”

To catch future episodes of DISRUPT, follow our LinkedIn channel