The Chain Restaurant of 2030: Part II

A Dance of Automation and Authenticity

This is Part 2 of our look at the restaurant of tomorrow. If you missed part one, you can check it out here.

Nearly two decades ago, industrial steamer and griddle manufacturer, AccuTemp, unveiled a bright yellow robotic arm at numerous trade shows across the country. Aptly named, “Flipper” was capable of flipping as many as 500 burgers and pancakes a minute.

While its creator, Gene Tippmann, claimed Flipper was designed as a show-stopper rather than a real hardware solution, the prototype offered just a fleeting glimpse at his view of the future.

The pioneering engineer is said to have imagined a world where highly advanced robots rule commercial kitchens, carrying out most, it not all prep and cooking tasks. Without the need for human staff, a restaurant’s back of house could be drastically downsized. As an added bonus, energy costs would decrease, considering the machine’s ability to clean itself after hours… without the need for lights.

18 years later, tangible manifestations of Tippmann’s vision are starting to materialize. Robotic arms, some similar in both name, as well as functionality, are finally beginning to rear their mechanized spatulas thanks to greater affordability and advancements in artificial intelligence.

Recently appearing on the Restaurant Business podcast, Fred LeFranc, of the consulting firm, Results Thru Strategy, stressed how quickly things are likely to progress — especially as frustration around rising minimum wages and a lack of available labor continues to build.

“There’s an interesting study by McKinsey that said by 2030, 800 million jobs globally will be replaced by robotics. Out of the top 15 roles, four were in the foodservice industry,” he said.

"Cashiers, cooks, counter attendants, hosts, and hostesses. These are the most prone to being replaced."

“The idea of paying someone $15 an hour to verbally recite an order, then look at a machine and key it in… a kiosk does that just as well,” LeFranc said. “We went through this with ATMs and airline tickets. This is a natural extension of that kind of technological advance.”

The Road to an Automated Reality

Already, there are ample signs that the future of foodservice could be fully automated. The rapid spread of kiosks is by far the most visible from a customer’s perspective. Meanwhile, more and more companies are snaring headlines, and investor attention, with flashy back of house enhancements. Though whether or not the rest of the industry sees as much value in these remains to be seen.

While the Founder and CEO of The Culinary Edge believes greater automation in the kitchen is inevitable, Noveshen maintains “there has to be a value-add to both the business, and the consumer. If you need people to stand there to make sure the robot works, then it’s not scalable or viable.”

These early developments may not be tangible options for most chains just yet, however, some early adopters are successfully alleviating pressure around labor problems with tech-centric solutions. LeFranc points to an increase in robotic runner technology as an example. 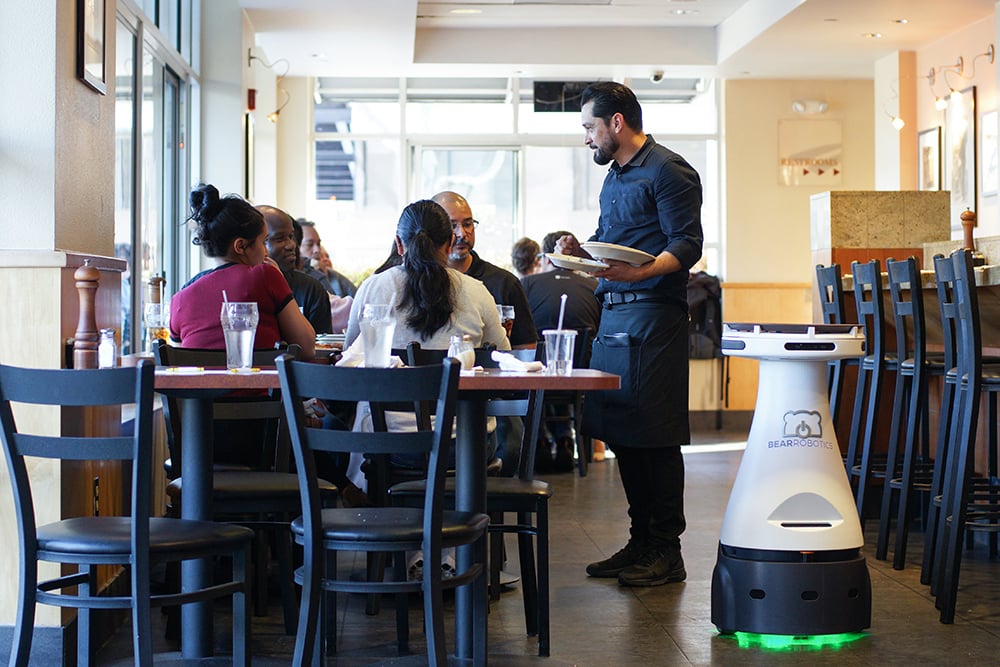 “There are restaurants out there eliminating runners and bussers and all that does is put more stress on those who are left out on the floor. Well, now you have a machine that can deliver food and take dirty dishes to the bus station,” he said. “You’re only saving minutes, but those minutes add up to hours. That’s what we’re talking about. Greater productivity.”

Other concepts, such as Boston-based Spyce, have gone beyond incremental improvements. The restaurant’s spinning wok setup handles all of the cooking, only requiring staff to garnish completed dishes.

The result of a partnership with Panasonic, the new technology will enable Haidilao to scale from around 400 locations currently, to 5,000 globally in the coming years. “Haidilao is not just a restaurant,” Founder and Chairman, Zhang Yong, claimed earlier this year. “We’re also a company that does manufacturing and logistics. Before the food is brought to the table, it’s all a manufacturing process. After that, the service aspect takes over.”

With so much innovation happening simultaneously, the possibility of Tippmann’s clean-in-the-dark robo-Frankenstein becoming king of the kitchen isn’t merely a tech nerd’s pipe dream… the machine’s ancestors are already in action.

Were you to ask those in the restaurant business what they thought of all this progress, at some point, most would likely claim that foodservice should remain decidedly human at its core. In an age of endless tech-driven disruption, this seems a somewhat romantic notion, yet it’s one even those radically reshaping the industry tend to adhere to. Healey Cypher, CEO of kiosk manufacturing company, ZIVELO, is chief among them.

“I can tell you what the future restaurant is not going to be,” he declared. “I don’t think it’s going to be yet another humanless experience, where you walk into a kind of unmanned Apple store and get your food from a bunch of lockers on the wall. I just don’t see it.”

Noveshen agrees. While the sheer novelty of seeing a robot box up your pizza may hold some charm for a while, he said it’s easy to imagine “a backlash against technology in 10 years. Maybe people won’t want to be on their phones and they’ll want to gather together and have phone-free experiences. The more people become stuck in their technology, the more they’re going to need to escape from it.”

Under these circumstances, restaurants, particularly full-service offerings, have an opportunity to redefine what dining out means to people. Brands that succeed in transforming the age-old experience of coming together and celebrating with others over food are likely to prove the most successful in luring people to the table.

“There’ll be more interactivity and it will become more of an event. Companies will have to offer something that you cannot get at home,” Noveshen stressed.

Many are rising to the challenge, with some even relying on emerging technology to do so. LeFranc highlighted concepts in Europe employing 3D projection mapping to conjure immersive augmented reality dining experiences.

“At these restaurants, the wall, ceilings, floor, everything is a giant video monitor. You could be sitting in the Sahara desert for one course, and the next minute you could be in a rainforest. It creates a multisensory experience. We’ve only begun to crack the surface of the innovation and creativity of what this is going to allow us to do.”

For Noveshen, engaging customers goes way beyond flashy bells and whistles. Companies across all sectors will need to come up with ways of weaving guests into the brand narrative in a way that genuinely resonates. Sometimes, the simplest of measures can go a long way.

“Is there something that drives the authenticity of the experience? Am I watching someone making a tortilla, versus pulling it out of a bag?”

Ultimately, how foodservice looks in 2030 will depend on the customer. Or, more accurately, how in tune restaurant chains are to the needs of this increasingly unpredictable guest.

Companies will “need to react quickly to whatever is happening in society at the time — economically, politically, and socially,” Noveshen said. “It’s high times right now. Caviar and steaks are hot, and when the next recession happens, it’s going to be the best way to use cheap cuts of meat.

“You’re either going to evolve to what customer needs are, or you’re going to be left behind."

“These are the new table stakes.”

No matter where society finds itself a decade or more from now, one thing will never change. Connection with customers needs to be the restaurant’s chief concern.

Strangely enough, in a world governed by technology on steroids, it can be far easier for companies to slip into a state of disconnect… Especially if they’ve become complacent. Falling further in love with shareholder concerns ultimately means falling out of touch with those they pledged to serve long before the maniacal pursuit of profits took hold.

Merely keeping up with the technology of the future won’t guarantee respect or favor with the masses. If anything, implementing innovation for innovation’s sake, grasping at technological breakthroughs simply because a competitor or two finds success with them leads only to desperation. By then, it’s too late. The customer will walk away for good, no matter how many times they’ve come through the door before.

“There’s an enjoyment that we, as humans, get out of experiencing food and I don’t want that to go away at all,” Cypher said. “I would love it if spaces were designed for us. Beautiful, authentic materials, nice places to sit, the wood, and metal. I hope it’s less plasticky and there are less robots.”

Whether or not the industry will make it to this utopian view, Cypher believes, rests entirely upon whether or not companies are willing to go after it.

“What it’s going to take is some bold innovators to go out there and create futures that are beautiful. It’s a concerted effort. It requires bravery on their part to go in and start, brave investors to fund them, and brave consumers to try it out for the first time. I have a lot of conviction that those people tend to prevail, eventually.”