Why Sweetgreen Could be the McDonald’s of Tomorrow

By the time Sweetgreen’s three founders opened their very first restaurant in 2007, they were extremely over budget and months behind schedule.

They were also barely out of their college dorm rooms.

“We had no experience or any business running a restaurant company,” Nathaniel Ru admitted during his talk at RestaurantSpaces, sharing a photo taken a few hours before the opening. In it, he and fellow business partners, Nicolas Jammet and Jonathan Neman, are panicking over the fact the “magnetic menu boards we’d spent all year designing didn’t stick to the stainless steel frames we had just installed.”

Seeing the image today is surreal. The salad chain now has 91 locations, and will this year grow that number past 100. Last month, Fast Company named Sweetgreen the sixth most innovative company in the world, ahead of the likes of Domino’s and Apple. In just under 12 years, Ru, Jammet, and Neman have gone from being unable to attach a menu board to a wall, to running a budding foodservice empire with a billion dollar valuation. They even mentor Gwyneth Paltrow from time to time.

To most, ‘foodservice empire’ may seem a wild exaggeration. But to these three 30-somethings, it’s an endgame they truly believe in. On occasion, they like to declare that Sweetgreen will one day be the “McDonald’s of our generation.”

“Our mission is very big. We think this is a 100-year company. We believe we can scale fast food in a healthy way, and we are very aggressive in terms of how big we think we can get,” Ru said.

It’s easy to laugh off such ambition. Currently, McDonald’s has more than 37,000 locations globally, leaving Sweetgreen with at least 36,900 restaurants’ worth of catching up to do — something Sweetgreen tends not to spend too much time worrying about.

“We’re trying to bridge the gap between culture and food for the next generation,” Ru said. “We try to focus less on what everybody else would do, and more on how we’re creating a brand for the future.”

This mission-driven willingness to reinvent the wheel is the rocket fuel behind Sweetgreen’s trajectory so far. Focusing on what its leadership calls building “intimacy at scale,” the company is constantly finding ways to re-engineer every aspect of the operation, with the aim of better connecting with an evolving customer. In recent years, this has meant a complete shift in how they were managing the business.

“Top-line revenue, same-store sales, four-wall margin, and average unit volumes. We were very much focused on these four things,” Ru said. “But we realized we were in this hamster wheel of trying to always do better than last year, without any input on how we were going to get that done. Just build more restaurants, find more people, serve more food.”

Rather than perpetuate this way of doing things, Sweetgreen adopted a customer-centric model of internal measurement, based on meaningful data analysis. This new framework involves monitoring how much customers spend over certain periods of time, as well as the frequency in which they interact with the brand over multiple channels, while also measuring satisfaction levels.

“When you take care of your customer and really understand and have a direct connection with who they are, you can make decisions in real-time,” Ru said. “Make sure that you’re measuring the right things in your businesses. Things are changing, and technology is really disrupting a lot of the things we do in the restaurant space.”

Working with Tech, Not Against It

The main way Sweetgreen has managed to keep ahead of this tech-driven disruption is by causing it. A recent example of this is the company’s direct-to-office ordering initiative, Outpost.

“In reality, Outpost is only a shelf we install in office buildings. But really, the magic behind it is the technology layer we’ve built,” Ru said. “The win for the customer is that it’s free delivery. The win for us is we still have that direct relationship with the customer and from a customer acquisition standpoint, it’s really massive.”

First rolled out in a number of WeWork locations last September, close to 100 workplaces around the country have already opted in, with many more expected by the end of this year. Ru has previously stated Outpost will be a much larger channel than their restaurants one day — a statement he still stands by.

“If you see what’s happening with food delivery apps today, customers expect things faster, and in real time. If you’re a brand that can provide both the food, and own the pipes, which are channels like Outpost, or delivery, then you’ve won. We think there’s a world where you don’t have to do what delivery apps say. You can do it yourself.”

"Mobile ordering is growing at 80 percent year-over-year for us, and it’s not slowing down.”

However, few other restaurant chains are in this kind of advantageous position. Amazingly, at a time when most brands are struggling to deal with the complexities of third-party delivery, at Sweetgreen, mobile ordering represents 46 percent of sales. More remarkable still, most of those sales come through the company’s proprietary app, which was developed in-house in 2012.

“It’s the fastest growing channel in our business. Mobile ordering is growing at 80 percent year-over-year for us, and it’s not slowing down,” Ru said.

Building the Responsive Restaurant of the Future

While these kind of achievements are sure to draw the envy of many legacy chains, Ru maintained none of it would have been possible, had they not first invested in properly modifying Sweetgreen locations.

“At restaurant 21, we stopped building restaurants,” he said. “We went back to the drawing board and asked what the restaurant would look like 10, 15 years from now.”

The overhaul saw the company install secondary make lines to handle increased output, with some new restaurants boasting as many as four of them. The ability to add modular shelving as needed in front-of-house was also planned for, enabling order-ahead customers to run in and grab their food as easy and as quickly as possible.

“These things weren’t actually that revolutionary,” Ru explained, matter-of-factly. “They were just things we did early on to future-proof stores. Even if we don’t have the demand now, we build it anyway, because the opportunity cost of not doing that today and the cost of retrofitting outweigh each other.”

While these kind of design considerations are now gradually becoming common practice among restaurant chains, Sweetgreen is also constantly devising less orthodox methods of enhancing back-of-house operations. One such example is an oven efficiency app that draws upon sales forecasting, weather, and inventory data to determine how much food will need to be cooked on any given day. Using an algorithm, the app informs specific staff members exactly when they need to roast a certain type of food.

“All someone has to do is press their name, it gives them a list of everything they need to do, so they don’t have to think about it,” Ru said. “What people don’t see is the technology we make to make the job easier. How do you leverage tech that enhances the human experience, but doesn’t replace it?” 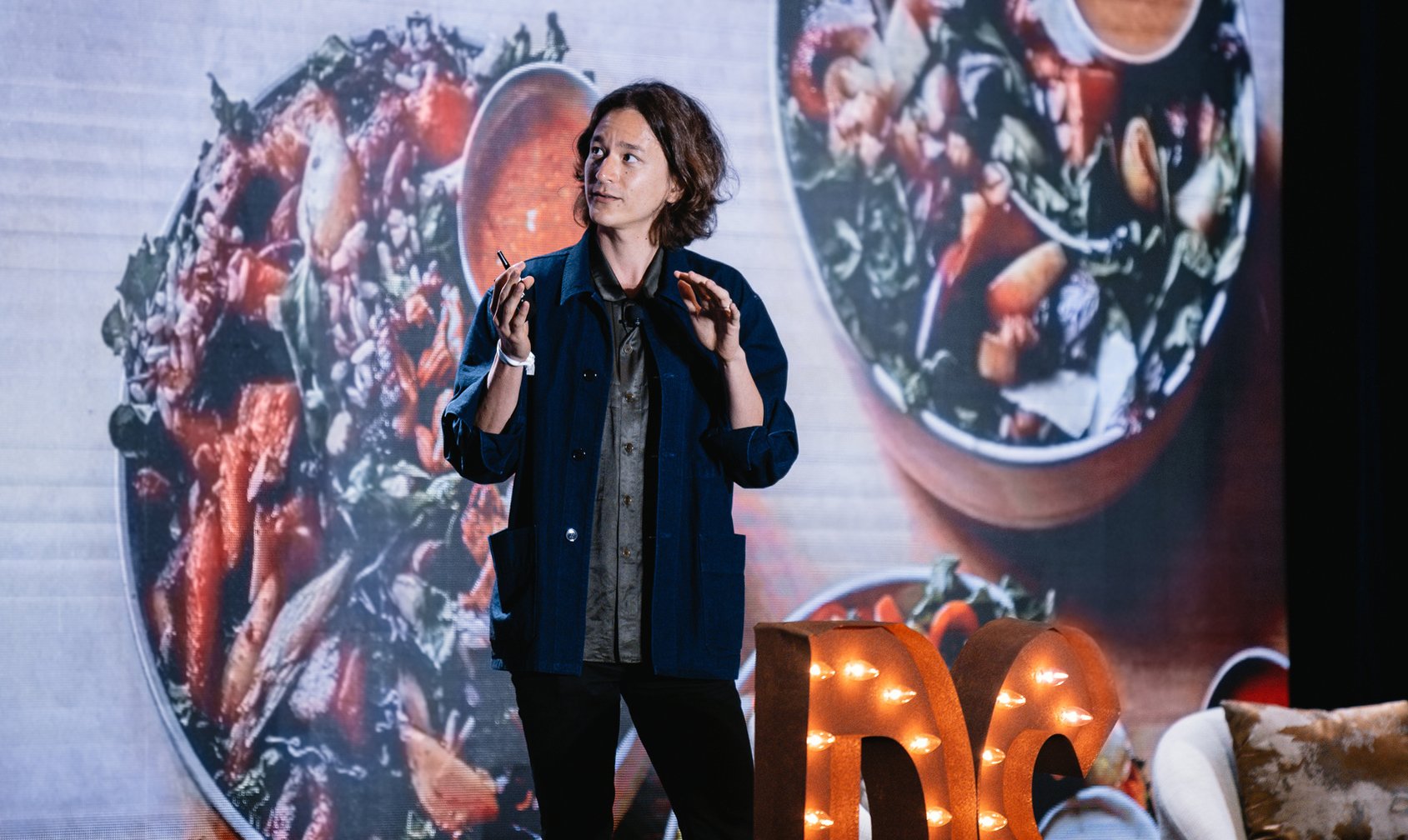 Becoming More Than a Restaurant Company

Coming up with inventive solutions to these kinds of questions not only keeps Sweetgreen ahead of the pack but forces the rest of the industry to discard the status quo. The way the company has utilized new technologies to garner the results it has so far provides a small glimpse at the success it’s capable of achieving well into the future.

“Scale is very different than it was even 10 years ago. We do not want to build the same restaurant over and over again,” Ru said. “For us to be as big as McDonald’s… that’s a lofty goal for sure. But the way in which we’ll do that is going to be much different because it’s going to be built on technology.”

"If you’re not human, then you become just a transaction.”

There’s simply no reference point for the mind-bending amount technology is going to morph the way people will live five, 10, or 50 years from now. But Sweetgreen knows that keeping ahead of the curve is the only way of ensuring they’ll have a shot at meeting customers on the other side of the momentous change to come. What its founders understand best is that running a restaurant brand in the not too distant future will need to mean far more than merely having restaurants on the ground.

If nothing else, Sweetgreens’ cleverly publicized efforts to support the communities they’re in, its music festivals, as well as initiatives like the Sweetgreen in Schools program, offer tangible reminders of its commitment to “connect people to real food.”

“These are the things that make brands really human. If you’re not human, then you become just a transaction,” Ru said. “Finding moments to be human is what really builds brands for the future.”

RestaurantSpaces 2020 will again bring together a unique mix of legacy brands and emerging players. Experience these valuable insights firsthand when we head to Los Angeles, March 1-3. Request an Invite here.