From Window Designer to Chairman of the Buffalo Wild Wings Board 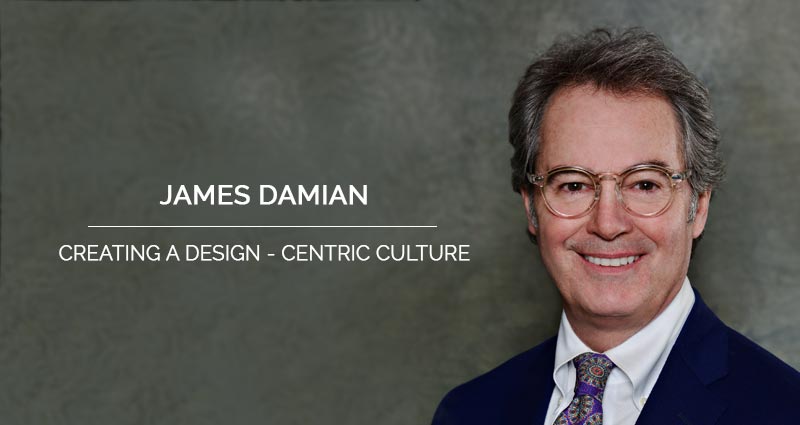 In today’s tech-centric world, brick-and-mortar stores are no longer the first point of contact for consumers--or even the second. That’s why James Damian believes inviting design thinking to the strategy table is absolutely crucial to the success of any brand, regardless of industry.

Damian will share his unique perspective as a store designer who now guides strategy in the C-suite in his keynote talk at RestaurantSpaces 2017. The current Chairman of the Board for Buffalo Wild Wings will explore how brands can leverage the untapped power of design to create an experience beyond what they sell.

Now in his ninth year with B-Dubs, Damian never planned to sit on a board. He got his start designing window displays all over New York City in the ‘70s, working with incredible merchant visionaries from A&S, Macy’s and Gimbel’s. His early influences harnessed art, creativity and design to sell more than just goods: they sold dreams specifically around the audiences they served. This special value paid to design stayed with him as he went on to numerous executive roles in retail before landing the title of Chief Design Officer at Best Buy in ‘98.

“The reason I came to Best Buy was there was a rare CEO who recognized the need to build a culture of innovation.”

“Best Buy saw the need for ‘aliens’ at the table in order to grow as a company; that is, a different voice besides the usual suspects who all speak the same language and aren’t diverse in thought, gender, background, etc.”

At Best Buy, Damian pioneered the customer experience with creative visual merchandising and design that was woven into the overall purpose, vision and strategy.

“It always goes deeper than designing the store, no matter where I travel in the world,” he said. “A store is an outcome of something greater. It’s this higher purpose that’s lacking in the boardroom and from the CEOs hired by boards. They need to do something really distinctive, not just different--and few brands, no matter what industry, live in this space of distinction.”

Damian’s keynote will speak to the importance of distinction vs. differentiation, sharing stories from brands that have perpetuated themselves by making design accountable for facilitating the strategic conversation. It’s these design-centric CEOs that build a culture of innovation; he cites Howard Schultz and Danny Meyer as benchmarks of great leadership.

The best leaders, according to Damian, always continue searching for the thing that makes them distinguished in the marketplace to create a loyal relationship with the customer. Damian also believes CEOs must live and breathe design around the habits, rituals and behaviors of Millennials and Gen Z. Since these generations are all about self-actualization, they’re first informed by what apps appeal to them-- which leads them to the website and lastly to the physical space itself.

“Customers are rewriting the code as to what drives them to stores,” Damian said. “The freedom of apps and websites gives customers the ability to place an order and get delivery--these are key issues in both hospitality and retail. It’s due to what I believe is a lack of strategic thinking holistically.”

“Customers are rewriting the code as to what drives them to stores.”

To bridge this gap, Damian proposes a marriage of the left and right brain--a holistic strategy rather than the typical estrangement between creativity/design and hard-and-fast logic. In his 40-year career with some of the most iconic brands in the world, he has found that success relies on an entity within the organization that is always thinking about what’s next to create a new model for the future.

“That kind of creative destruction needs to happen inside the culture. There should be two cultures, not competing but equally respected,” he said. “They have to work together so that we can take risks.”

Damian will also outline how CEOs can successfully take risks--in a controlled manner.

“There’s a difference between designers and artists: Designers work in the business world to make products and experiences that must operate in the parameters of time and money, whereas artists are free without boundaries,” he said. “Designing the future can have its parameters, so the CEO must hold the Chief of Design accountable on deliverables. Most CEOs think design is too vague to measure, but they must understand the economic value to design: statistics back up the fact that design-centric companies outperform.”

To Request an Invite to attend RestaurantSpaces click here.