The pain of ever-increasing construction costs is a reality restaurant executives are well-acquainted with.

Whether it’s having to deal with different regulations and permit requirements across multiple states, a lack of skilled contractors, or delays in getting utilities turned on, the list of challenges involved in completing a project grows more difficult every year.

“Across the country, the biggest factor currently driving development costs up is subcontractor resources in relation to the required workload,” Executive Director of Real Estate and Construction at Panda Restaurant Group, Derek Knight, said. It’s a situation, he noted, caused by the “high demand for all sub-trades, who can pick and choose the jobs they want to work on.”

At a time when the restaurant business is evolving faster than ever, a company’s ability to get locations open as quickly and cost-effectively as possible has never been so important. Given the rate at which changing customer expectations is spurring on factors like digital ordering, off-premise, and an emphasis on overall experience, chains need to get better at constantly adapting their entire offering. Failing to secure the “easy wins” in keeping costs down will ultimately affect a chain’s ability to invest in pivoting the way it needs to.

“I call it the delicate ballet.”

In an industry facing a lot of uncertainty, the truth is construction costs are a relatively easy win. But only if chains work smarter. As corny and Hallmark-esque as it may sound, the key ingredient to achieving this is “teamwork.”

Some, like Chris Delusky, Eataly’s VP of Construction and Design, have a different name for it.

“There are a lot of integral conversations that have to happen to just get the design developed and then we've got to go through the entire building process and then operate the business,” he said. “I call it the delicate ballet.” 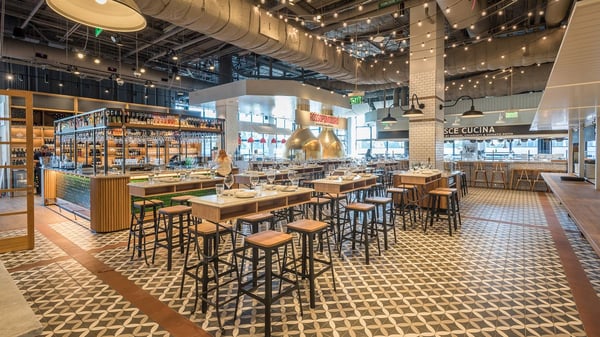 A dining area at an Eataly

For a concept that skews closer toward ballet on the foodservice spectrum, Eataly is understandably a different beast when compared with the QSRs and fast-casuals of the world.

Rather than a race to open as many locations  as possible, Eataly’s focus revolves more around design and experience. Fixtures hand-crafted in Italy, vast displays of artisanal food and wine nestled in between lots of wood and multiple sit-down dine-in areas… for Delusky, “it’s a much more complicated design and build process I've been involved in for a long time. Our restaurants are interspersed right in the middle of our retail programs and it’s a fantastic line to discover where the retail ends and the restaurant takes over.”

The company is currently focused on expanding on the seven flagships it has across the States. Right now, Delusky’s team is working to open Eataly’s newest location, in Dallas, later in 2020. The company also undertakes as many as three to four remodels on top of the one to two flagships they roll out each year. Given the complicated process of liaising with so many stakeholders, Delusky’s emphasis is on starting the process as early as possible.

“Because we’re such a multidisciplinary concept, the conversations that are undertaken between the design and construction team and the operations teams of the different programs we have under one roof have to start a year before the permits are even issued,” he said. “There are several dozen meetings with chefs, restaurant managers, and then all of the different retail people.”

Though it’s not just with internal players that this dance begins. Taking early steps with those from outside the organization is also an integral part of the process.

“We get expert advice as soon as possible,” Delusky said. “We try to have those professionals weigh in on scope, or what it’s really going to take to build specific elements in the store as early as the schematic design phase.”

Additionally, allowing ample lead time into a project is key to whittling down design spend as much as possible. Being the concept that it is, Delusky said Eataly is somewhat immune to ruthless cuts if that would mean jeopardizing overall vision. However, it’s certainly not free from the necessary pruning of value engineering.

While Eataly is opening one flagship in the U.S. this year, at Panda Restaurant Group, Knight is part of a team that rolls out roughly 100 remodels a year, on top of opening just as many new stores.
Despite it being a much more fast-paced operation in this sense, as is the case with Eataly, the earlier a project can get off the ground, the better.

“We do a significant amount of due diligence upfront prior to starting a project and well into it. As with everything else, there could be unexpected site costs; like unknown soil or changing environmental issues,” Knight said.

"Good communication builds the foundation of a project.”

What the advantage of time gives most to any project, is an ability to establish the required communication to keep a schedule ticking over and prevent costs from ballooning.

“Communication with developers is critical,” Knight said. “Timelines, challenges, and solutions through clear communication ultimately impacts costs, opening dates and dealings with vendors and contractors. I would say it’s one of the most important parts of opening a restaurant space, as good communication builds the foundation of a project.”

Putting All the Pieces in Place

Good teams fall apart without great communication, and communication can disintegrate without the right tools.

As with most restaurant development teams, Eataly essentially has a two-pronged approach to ensuring everyone involved is always on the same page.

“In terms of people,” Delusky said, “we’ve got a site-based project manager and we also have a corporate project manager who coordinates with the site superintendents and the general contractor.”

As well as this, the chain has recently invested in new project management software. Six months in, and so far, Delusky believes it’s going to have a big impact moving forward.

“I think it’s going to be a huge game-changer for the team,” he said. “We needed to have a really good reporting and control mechanism because of the large CAPEX spend that we have.”

Choosing to abandon a rapidly outdated practice of scrolling through spreadsheets and email to keep projects in line can prove a difficult sell to the C-suite. However, Delusky maintained it’s well worth helping those higher up the chain understand the many benefits.

“It helps keep the budget and schedule at the forefront of everyone's mind and as streamlined as possible,” he said. “And executive leadership can understand, relatively at a moment's notice, where we're at financially.”

A solid project management platform is also essential for handling that inevitable rush of change orders. Being able to tie everyone, especially outsourced players, into the mix helps minimize unwelcome bottom-line blowouts.

“From the external vendors’ viewpoint, they understand their role in the purchasing processes and they have a direct understanding of approval, and know where the documents and the schedule are. It's all kind of centralized as one up-to-date package that assists everybody.”

And that’s worth remembering. A project is only as strong as its weakest point of understanding. Without attention to everybody involved, a development team ceases to be an effective unit. To hit it home with a sport metaphor: If the team fails, the dream fails.

As Knight pointed out, restaurant chains need “detailed oversight of the project from beginning to end to make sure nothing slips through the cracks or is missed. "We have great talent here at Panda, and these projects are truly a team effort.”

Likewise, for Delusky, failing to encourage a true cross-pollination is what ultimately causes costs to get out of control.

“It’s very important that the operations team understands how the design is going to work. At the same time, the design team has to understand the needs of the operations and retail team. It’s a very in-depth, lengthy amount of conversation, and those conversations are mandatory,” he said. “The end result is that everybody gets what they need.”

"We’ve got to continually renew the store in the eyes of our visitors.”

The next few years will undoubtedly bring with them seismic shifts to the role of restaurant development. With all the rumblings going on in the industry — from the rise in ghost kitchens to advanced restaurant technology, as well as the inevitable rethinking of portfolio size — chains will need to evolve at a quicker clip than they are today. Development, design, and construction teams will be best placed to handle all this disruption — not to mention the changing nature of their role — if they’re a well-oiled operation, always thinking ahead of where they find themselves right now.

“The Eataly concept is continually refined. Part of the challenge is to look at existing programs in each of our stores. If something needs to change, we will change it,” Delusky said. “It’s fantastic for our business because we’re staying relevant and we’re changing with the tastes that our guests have. We’ve got to continually renew the store in the eyes of our visitors.”