Streamlining Back of House Operations in the Age of Online Ordering

A year ago, if you had stumbled into the kitchen of a Rōti Modern Mediterranean in the middle of Wednesday’s lunch rush, you may have found it hard to believe you were in a fast-casual restaurant.

“It was like the equivalent of walking into an ICU at a hospital,” VP of Technology, Jeff Miller, explained. “Lots of noise, lots of beeps and paper being printed out. It was just chaos.”

With the advent of third party delivery, a rise in delayed and inaccurate orders quickly became a major issue for the chain — something not even a second make line dedicated to digital orders could stem. With at least three tablets spewing out requests from separate sources, it was a temporary setup the company had scrambled to put in place but would never have provided a long term solution.

“It was like the equivalent of walking into an ICU at a hospital.”

“Staff were working on anywhere from one to 12 orders at a time and never knew when the next order was coming through, so they were always a little bit on edge,” Miller said. “We would need specialized people on the digital line because there’s only a certain kind of person who can handle working like that.”

Such a situation certainly isn’t unique to Rōti. Indeed, it’s a state of affairs many restaurant chains continue to struggle with as off-premise and order-ahead demand surges.

For Rōti, digital represents the fastest-growing part of the business. In the space of two years third party sales, as well as its own online channels have doubled. Early on, leadership knew it had to find another way of handling the inevitable digital groundswell still to come.

Fast forward to today, and it’s clear their efforts are paying off. At roughly half of the chain’s 42 locations, life on the secondary make line is a very different experience than it was just a few months ago.

“The noise volume is surprisingly different. There’s been a 180-degree turnaround. We also now have more team members who are able to operate at a high level of effectiveness in fulfilling digital orders,” Miller said.

This shift has come about through the chain’s partnership with Brightloom. Known once upon a time as Eatsa, the company offers both hardware and software solutions to streamline restaurant operations and guest experience. In Rōti’s case, Brightloom’s Omnichannel Intelligent Queue Software consolidates incoming orders from all third party channels, as well as its own online and in-store intake, eliminating the need for staff to manually battle against endless blips and beeps from multiple tablets.

“We’ve seen, as a result, an uptick in our average customer feedback scores and there’s been an increase in sales volume digitally from when we began implementing it to what we're seeing now, so we know it's the right solution,” Miller said. Thanks to faster response times, he explained, not only have Rōti’s rankings improved on third-party delivery apps across the board, but productivity is also up, leading to increased throughput.

The chain was so happy with the results, they wasted little time pushing ahead with an ambitious rollout of the platform. Following a short trial period at the start of the year, Miller said they’re now upgrading two to three restaurants a week and expect all locations will be running the software by the end of the year.

“We saw the business value early on, so then it was just about making sure all the integrations and our data flowed between the systems, making sure we really had that solid. It took a few restaurants to train our installation teams and build a repeatable process, which allowed us to attack it as aggressively as we can.”

Rōti and Brightloom’s newfound friendship is one that goes beyond mere practicality. Both companies are backed by private investment firm, Valor, known for funding high-profile companies like Bird and SpaceX.

Chowly, Itsacheckmate, and Tacit are just a handful of other players offering similar or overlapping services in a space sure to become much more crowded as startups jostle to capitalize on the industry’s third-party woes. Each offers different features or solutions which restaurants can pick and choose from depending on their needs. Included in Brightloom’s repertoire, for example, are kiosks, POS systems, mobile apps, digital display boards, data collection and analytics, as well as pickup shelves and cubbies, which it first became known for. 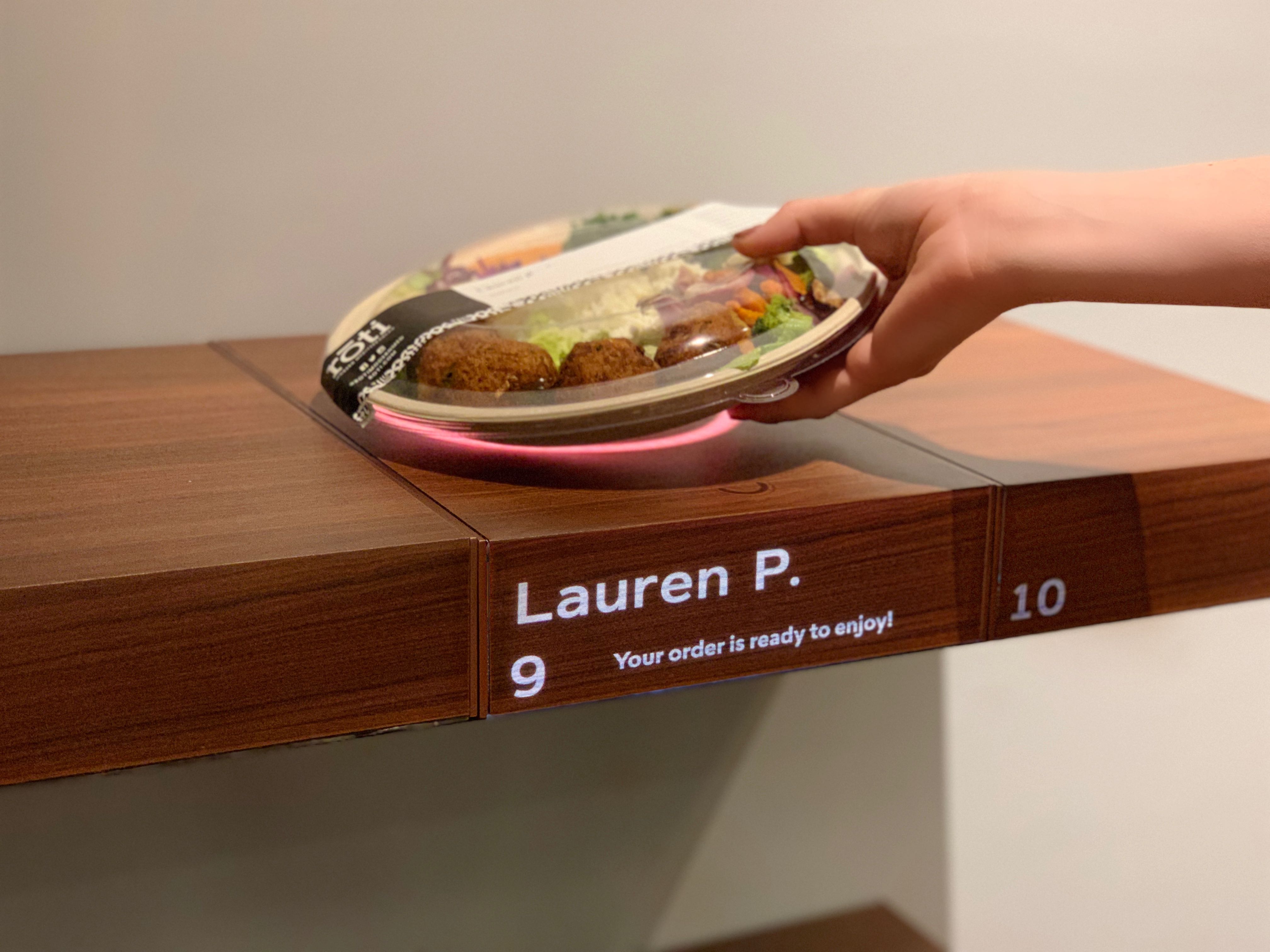 Collection shelf in use at Rōti Dearborn St

While Rōti is currently only rolling out third-party queuing software, it’s also piloting the full range of Brightloom’s offerings at its Dearborn Street location in Chicago.

“We’re early days with that solution. We love the idea of improving customer experience by helping them know exactly when their order is going to be ready and where they need to pick it up,” Miller said. “Nothing's more frustrating than an experience where I have to touch multiple cups or bags to find which one is mine.”

As customers become increasingly used to frictionless encounters with forward-thinking brands — both within and outside the restaurant industry — it will be crucial for chains to execute a solid digital convergence strategy if they’re to remain relevant.

Admittedly, finding and adopting solutions is much easier for smaller chains like Rōti to accomplish. For legacy players with a sprawling portfolio and foot traffic that’s beginning to falter, operating with the same agility is a tall order. However, if restaurant chains aren’t already conducting serious experiments in the hope of smoothing out a ruffled and segmented customer journey, they may already be on their way to obsolescence.

"Restaurants need to be at a point where it's less about digital commerce and in-restaurant commerce and it’s all just unified commerce.”

“The ways that customers can order nowadays is just so varied that you need a system, an architecture, that can accept orders in any way and be able to fulfill orders anywhere. Domino’s is a great example, delivering pizzas to a specific point on a beach,” Miller said. “Ultimately restaurants need to be at a point where it's less about digital commerce and in-restaurant commerce and it’s all just unified commerce.”

Adding a Little of That Human Touch

While embracing technology is surely going to be key for every restaurant chain to remain in the game, they also need to ensure they traverse that knife-edge between gleaming innovation and well-worn tradition — something still deeply embedded in the customer’s DNA. In-demand, thumb-tapping convenience may still be at the beginning of an unfathomable trajectory, but in an age of widespread digital deftness, how can we prevent the restaurant from devolving into a space of mere soulless transaction? If restaurants come to offer nothing consumers can’t just get from their screens, how will some physical locations manage to justify their existence?

Some that have already invested heavily in high-tech environments are indeed thinking about these kinds of questions.

Fast-casual Asian bun concept, Wow Bao (also Valor-backed), is one of them. The young chain was forced to adapt its customer-facing cubby collection setup shortly after installing it at one of their locations.

“What we found is people want to be able to see the kitchen,” Wow Bao President, Geoff Alexander, said during a State of the Industry discussion at RestaurantSpaces ‘19. “They were worried about who was making their food. So after we came up with this great wall [Eatsa’s cubby system] that’s very cool technology, we had to blast through the wall and actually show that there are people in there. Nobody actually looks, but it’s there for comfort.” 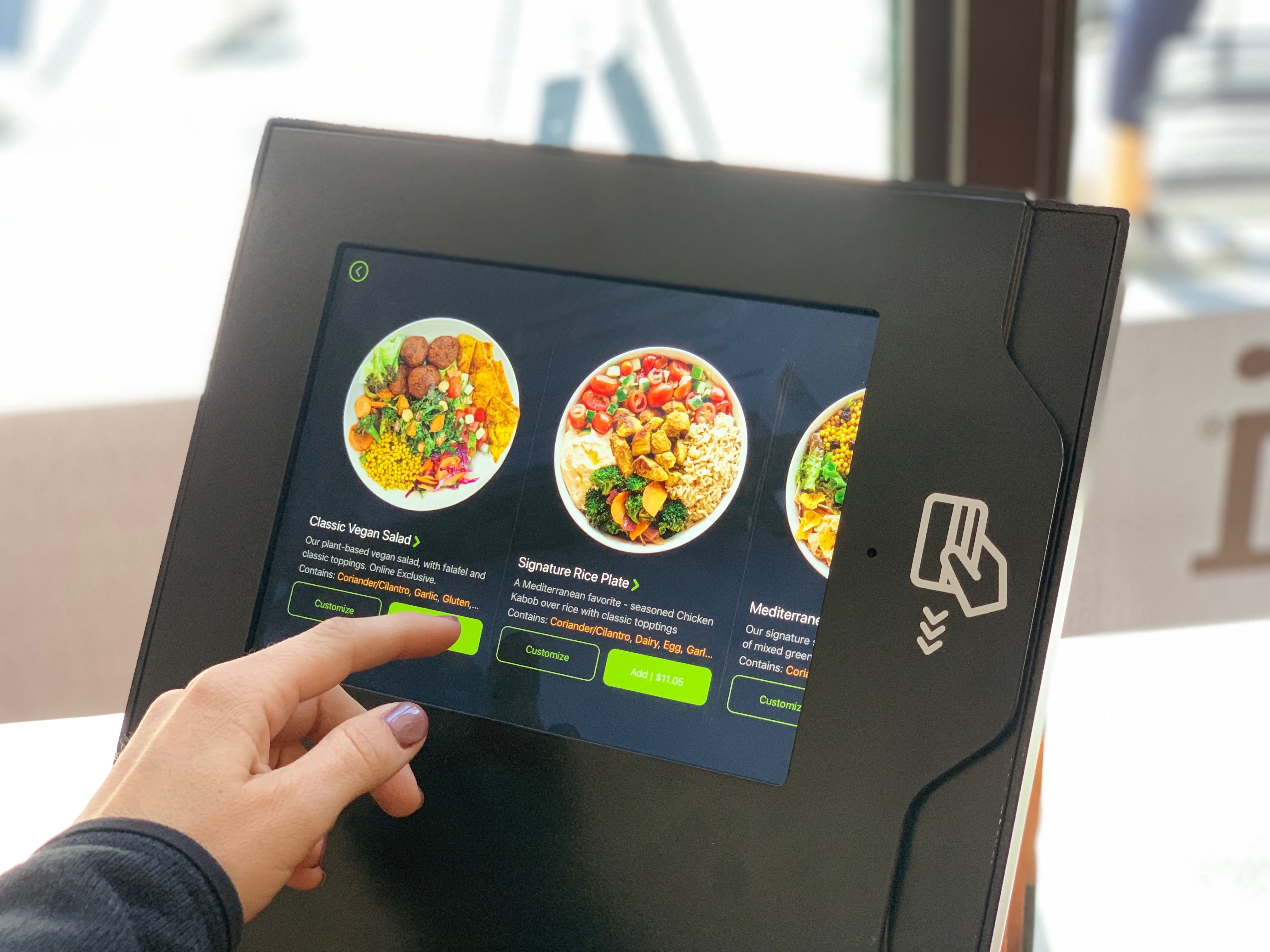 Kiosk in use at Rōti Dearborn St

Restaurant chains must not only carefully consider what kind of technology to invest in, but also how they’ll continue to tell their story with, and in the midst of, that technology. As Alexander explained, even though Wow Bao is “a very tech-focused concept,” he and his team are always asking “how do we use that technology to give better hospitality?”

According to Miller, the challenge ahead is for chains to uncover increasingly rare opportunities to build robust customer relationships and leave lasting impressions.

“Technology is great from a productivity and efficiency perspective but what it’s also doing is decreasing customer interaction with the brand,” he said. “What was once hours, then half-hours is now minutes and even seconds. The devil is in the details — from the packaging of the meal when it’s with the delivery driver, to the pickup experience, or offering something unique and personalized.”

"Digital is a really powerful tool but not designed well or trained well it can be really dangerous."

It’s these fleeting “micro-moments,” Miller believes, that can make or break a brand’s craveability, and ultimately, its longevity in an ultra-competitive market. In order to uncover brilliance in the details, however, companies will need to operate much more horizontally. Should tech, marketing, store design, development, and operations departments continue to exist cut off from each other in siloes, the future will be bleak.

“Technologists need to adopt more of a systems view of the world and not just introduce cool tech, because it's a double-edged sword. Digital is a really powerful tool but not designed well or trained well it can be really dangerous. Those concepts that really think about the entire customer journey as well as the employee journey and where they intersect are the ones that will be successful in the future.”

Digital ordering consolidation is just one of many themes we’ll be exploring at RestaurantSpaces 2020. Make sure you’re part of the conversation, request an invite below.